In the history of League of Legends, Faker has proved time and time again that he's the greatest player of all time in professional play, but many believe that Apdo was better overall. Sure, he has never played competitively, but his dominance in Solo Queue over the last ten years and his accomplishments speak for themselves.

His beginnings in the League scene

When Apdo started playing League in 2012, the Korean League scene was still undeveloped, mostly due to the late opening of the Korean server. Even though Korea has always been a leader in the Esports department, back then League was still a new game and professional players weren't paid very well, sometimes even below minimum wage. At the time, Apdo was still in college, and the idea of being a pro player wasn't very enticing to him. So he chose another career option and he proved to be the best to ever do it. Apdo started a boosting service, which was a very lucrative business back then, so much that he once said that he made enough money in a year to fully pay his college tuition. And he was the best one in the field, consistently boosting accounts with absurd win rates to challenger while holding Rank one on the Korean server on his main account. In 2013, he announced that he had to serve his mandatory 20-month service in the Korean military, but after being gone for three days he came back to streaming, saying he managed to postpone it. The only way to postpone mandatory military service in Korea is to be a student or be very successful and represent the country. So most League pro players used their occupation to do that until their careers were over or until they were 28 years old. Apdo also announced that he’s retiring from League at the end of season 10 to serve his service but is still playing currently in season 11. While Faker was busy winning his first World Championship in his rookie year, Apdo was still boosting so he decided it was time to prove himself in the only League field he wasn't well accomplished.  He created Team Dark with some of his friends from Solo Queue and entered the Pandora Champions 2013/14 qualifier. The winner of this event would be promoted to the LCK, the highest level of League competition in Korea.

But just a day before the event started, Riot Korea announced that Apdo was banned from playing in a competitive league for two years and that his Rank one account would be banned for 1000 years. The fact that to get a League account in Korea you need to enter your social security number also meant that Apdo could never create a new account until the year 3013. This was Riot's punishment for his boosting services and toxic behavior in Solo Queue, which they knew about but couldn't prove until then.

There is a story that a female fan of his, with a history of romantic relationships with other streamers, purchased his boosting services. The girl wanted to have a romantic relationship with him, but when he turned her down, she got upset and directly contacted Riot Korea, telling them to investigate his service and giving them evidence of his behavior in Solo Queue. She also exposed his actions in a post on Inven, the Korean version of Reddit in the west, which would be seen by thousands of people and forcing Riot to act.

The only way he could play on the Korean server was by using accounts from his friends and family, but those would also get permanently banned if he streamed playing on them because account sharing is not allowed by Riot. 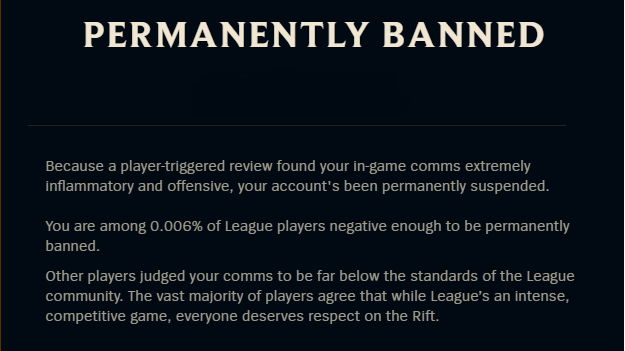 The sad and short history of Team Dark

In the meantime, Team Dark entered the qualifying event, and won the first game with a substitute, but after losing Apdo they weren't focused on winning.  In the second game, they decided to troll Riot Korea by picking five junglers in a professional game as a sign of respect to recently retired League pro CloudTemplar and spelling out "Let's go gank" in Korean with the first letters from their banned champions. The game was over in eight minutes and still holds the record for the shortest professional League of Legends game. Three days after that, Riot Korea and Kespa disqualified Team Dark from the event and permanently banned all the players from competitive matches.

After the fallout with Riot Korea, Apdo decided to go to China to focus on streaming and participate in a Solo Queue challenge for Rank one. The winner would get 80 thousand dollars worth of prize money for reaching Rank one on the newly formed Chinese Super server. The server was created by giving accounts only to players that were Diamond one or above in the other 29 Chinese servers. Needless to say, the new server was super competitive with Diamond one players from other servers that couldn't get out of silver on the Super Server. But this wasn't an issue for the god of Solo Queue, who started streaming his gameplay on the Chinese Super server on September 9 2014 and got master tier just two weeks later on September 23. What's more impressive is that in the next seven days he managed to get Rank one at 1300 lp. He got 1300 LP in seven days against the best players from the 29 Chinese servers and pro players, which is ridiculous to think of. He then made a public offer to Riot, offering 100 thousand dollars for them to unban his main account, which they of course refused. Since then, Apdo has been mostly silent, focusing on streaming and content creation for his booming Youtube channel. He's been getting Rank one every season, on both the Chinese and Korean servers with ease, further solidifying his legacy as the greatest Solo Queue player of all time. In 2017, after he got Rank one in Korea, he admitted that he's addicted to playing PubG and wanted to pursue a career in that game as well. He has stated that he feels like he needs to improve and become better at League so he can end matches faster to have more time to play Pub G.

What makes Apdo better than others?

Unlike pro players who are usually very proficient in one role, Apdo has proven himself by getting to high challenger on multiple accounts while playing every role except for ADC. His philosophy of making small correct decisions over the risky highlight plays has given him great results. He has stated that the reason he chose mid and jungle, as his main roles, is their access to the entire map which he can impact with his decision making. This also shows in his champion pool when he's climbing, with Orianna and Twisted Fate being his signature champions, capable of impacting the map and controlling the flow of the game. All of this proves how good his fundamentals are, and he has said that only Faker could match him in that aspect regarding laning, tracking the jungler, and inventing new stuff. Even with all the controversy surrounding him, Apdo has managed to cement his legacy around his gameplay. Consistently proving he is the best player in the world in the most popular game, on multiple servers by being the best of the top 0,1% of players.

It's really disappointing that we never saw how good he can be on a competitive level, but he has managed to develop a brand and a name for himself without setting foot in that field, which is ridiculous to think of.

A player that will forever be remembered alongside Faker, for introducing different concepts on how to win in League, and using them to become the king of Solo Queue.